Summary: As the picture attests, I’m all set for 2014, and it wasn’t difficult.

Yes, the healthcare.gov site has glitches, but it is far from a disaster. The first time I tried to register, which was shortly after the site opened, I abandoned the effort because the site was acting a little flaky, and I had heard there were problems. The second attempt to register went smoothly.

I saved some links with plan details to help me choose the plan I wanted. After I decided on a plan a few days later, I visited the site around 2am to enroll, figuring traffic would be lower at that time. The site was down for maintenance. So I went to sleep and easily enrolled the next morning. I set up my recurring payment at the time I enrolled. A few days later I received the card you see in the picture.

My rates are less than half the 2014 rates on my existing plan. I choose a higher deductible. If I had chosen the same deductible, my rates would still have been cut in half. That’s without a subsidy.

I wouldn’t doubt that others have had a harder time enrolling, but if you’ve tried, don’t give up. I understand you can also enroll by phone now. I suspect many, if not most of the people shouting the loudest are the 90% that have insurance through work and thus have never tried to register and enroll on the site. Let’s try to keep this in perspective.

The truth is that millions of Americans can now be insured that couldn’t afford it before, due to the larger risk pools and competition that the ACA makes possible. It’s not as good as single payer, but it’s better than what we have now.

Finally, here’s some words from the Dean Baker on the Nation of Change site that explains why you should care even if you don’t need one of these plans at this time: 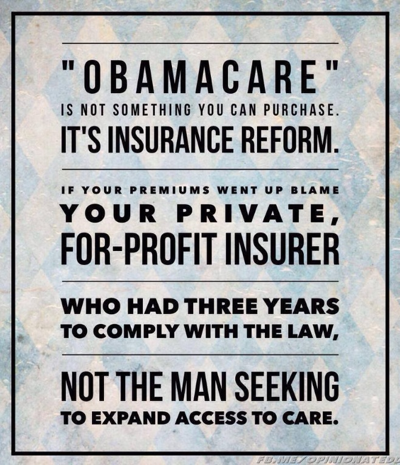 “The vast majority of the insured in the working age population get insurance through their job. This means that if they get an illness that causes them to lose their job they are likely to soon also find themselves without insurance. They will then be forced to buy insurance in the individual market where premiums can be tens of thousands of dollars a year, since they would be applying with a pre-existing condition.

“Obamacare ends this situation. Insurers can no longer discriminate based on pre-existing conditions. This means that most people will be able to find affordable policies in the exchanges.

“In addition to providing security, millions of people who are working at jobs that they hate will no longer feel the need to stay there in order to get insurance. That is a big deal. In fact it’s a bigger deal than almost any other piece of legislation that Congress has passed in the last three decades.

“That is what we stand to gain if the ACA can survive the hysteria that is now consuming Washington. If we look for the substance in the hysteria, it doesn’t come close in significance.”